‘Urban village’, chengzhongcun in Chinese, literally means ‘village-in-the-city’. It is formed when urban expansions besiege rural villages without integrating them into formal urban development. This phenomenon is uniquely formed under China’s dual land ownership system. Urban land, where development is formally planned under urban master plans, is owned by the state; however, land in rural villages is collectively owned by the villagers and is not within the scope of formal planning. Land in rural villages can only be developed after being expropriated and converted into urban land status to be fully integrated into the statutory urban planning system. Due to the high compensation cost involved in relocating villagers, urban expansion simply encircles land around the village. This means that the village is left intact and it becomes a village-in-the-city.

Based on a three-year research project, funded by the Economic and Social Research Council’s Newton Fund, a living conditions and residents’ satisfaction survey was carried out in 21 neighbourhoods in the Beijing metropolitan region, including three urban villages, Hanjiachuan, Langezhuang and Dinggezhuang, in the peri-urban areas. Most dwellers of these urban villages were low-income migrant workers who were tenants of village farmers’ houses. Of the 370 respondents, over 70 per cent were tenants and about half of them rented a living area of less than 20 square metres.

The survey asked 370 villagers to rate different aspects of the local living environment, including air quality, green and open space, infrastructure and public services, on a five-point Likert scale (with 1 being very dissatisfied and 5 very satisfied). The findings show that residents were generally content or even satisfied with the living conditions, with the average scores between 3 and 3.5 for different items. The only area about which the residents were vocal was the lack of sport facilities and venues, with the average satisfaction level below 3. When asking about their overall living quality in the local neighbourhood, only about 10 per cent said that they were not satisfied.

These rented properties, mostly developed illegally, were of sub-standard condition and lacked many living amenities. Our own on-site, criterion-based assessment of the neighbourhood environment found that the physical environment of these villages was dominated by ‘disorder and unruliness’ and often demonstrated inadequate waste treatment facilities (see Figure 1). 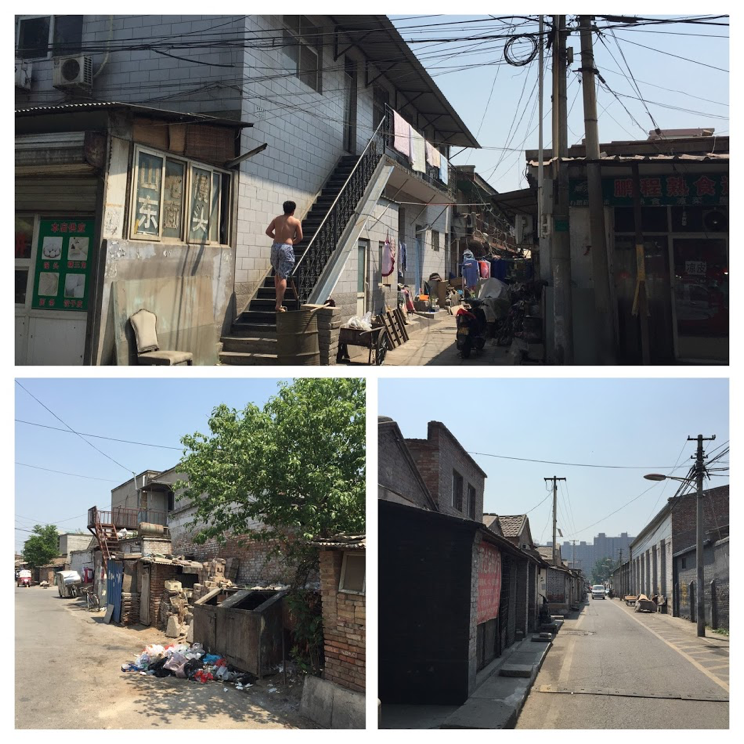 The satisfaction level with local living environment among urban village dwellers is understandable when considering the life opportunities of indigenous villagers and tenant migrants. To indigenous villagers, rental income provides a secured income to free them from laborious agricultural work and worry over the loss of farmland (He et al., 2010). To migrant tenants, who are low-skilled and low-income, affordable cheap rent is critical to keep their living expenses to the minimum (Zheng et al., 2009). In our survey, only 10 per cent of the urban village respondents had college education or above (the figure is 35 per cent for Beijing average) and nearly half of them were employed in manufacturing or small business; almost 90 per cent had an annual household income of under 150,000 yuan, which was the average amount for urban households in Beijing in 2016. These migrants came to Beijing for work opportunities to earn a livelihood that meets their basic needs. Urban villages emerge as perfect locations for migrant workers because of the low-cost housing, with reasonable transport access and convenient living with local shops and facilities run by other migrants (see Figure 2).

The redevelopment of urban villages

Despite the poor quality of their living environment, the satisfaction level of residents in urban villages was actually slightly higher (statistically significant) than the other outer metropolitan neighbourhoods. The discrepancies found between the criterion-based assessment and the subjective assessment of residents regarding their living environment raise an interesting and important issue about the role of planners and planning in neighbourhood regeneration. It is clear that residents’ assessment is closely related to their expectations, which are shaped by their life experience, socio-economic and cultural background. When interpreting the survey findings, we feel that both the universal value and subjective value of what constitutes a desirable living environment are relevant.

The spatial development of peri-urban villages has undergone two intertwining processes. Migrant workers have settled in urban villages as they are the main source of low-cost housing supply. Under the dual land ownership system, indigenous villagers try to build informal hosuing in collectively owned land and lease them out, as it is an under-regulated grey area (Wu et al., 2013). However, with the gradual introduction of government-led redevelopment programmes of urban villages, many indigenous villagers have been relocated and compensated for their loss of land and properties, whereas the migrant workers as tenants will simply be forced out from their homes and receive no compensation. This means that the redevelopment outcome often results in gentrification of the area (Liu and Wong, 2018). From a spatial perspective, urban village redevelopment starts from the inner urban areas and then expands outwards, pushing migrants further and further towards the urban peripheries. For example, the number of tenants in Hanjiachuan village soared after the demolition of several more centrally located urban villages to make way for a major redevelopment of an IT industrial park.

Beijing city has a total population of over 21.7 million in 2016, but about 8 million without Beijing household registration (hukou). While there are no precise statistics, many rural migrant workers rely on renting in sub-standard, informal development to resolve their living problems (Wu, 2016). Urban villages, as informal settlements in peri-urban areas, play an important function in providing a bridging housing solution for low-income migrant workers. However, top-down urban village redevelopment projects have been squeezing the housing space out from the migrants. The Beijing government’s recent policies of ‘dispersing, regulating, and upgrading’ and ‘shantytown upgrading’, which aim to redevelop urban villages to achieve urban-rural integration, have attracted much media attention. While the physical infrastructure of a rural village can be upgraded to an urban standard, it is challenging to properly relocate or accommodate the needs of low-income migrants in this process.

Lessons to be learnt

China’s National New Urbanisation Plan has made a step change by adopting a ‘human-centred approach’ in planning. However, to realise this core principle fully in the redevelopment process of suburban areas, especially the demolition of informal developments in urban villages, will require more considerate and measured approaches, as well as more bottom-up participation by the community. Indeed, the lessons learned in large redevelopment and clearance projects have brought major challenges to British planners since the 1950s. The social and community impact brought about by drastic redevelopment activities in London’s Bethnal Green, for example, was well documented by Young and Willmott (1957). In 2002, the UK government’s push for Housing Market Renewal Pathfinders in areas with low housing market demand triggered another round of heated debate (Tunstall and Lowe, 2012). There are thus important – transferable – lessons to be learnt from different international contexts on how to manage and plan for regeneration by putting people at the heart of the process.

Tunstall, B. and Lowe, S.G. (2012) Connected communities: 'Breaking up communities'? The social impact of housing demolition in the late twentieth century. Report to the Arts and Humanities Research Council, Swindon.

ALL IMAGES COURTESY OF THE AUTHORS