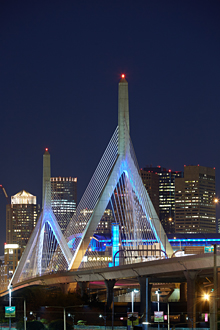 I’ve been wrapped up in reviewing the new monograph on Swiss bridge designer Christian Menn for the journal Built Environment this past month.  Menn is perhaps most widely known in the U.S. for his collaboration on the Leonard P. Zakim Bunker Hill Memorial Bridge spanning the Charles River in Boston (Image 1 left).  This, though, is only the North American capstone on a remarkable career that has populated valleys throughout Switzerland with elegant bridges and viaducts that are shaped and detailed as dialogues between static principles and local topography.

Menn’s best-known Swiss work is probably the Ganterbrücke over the Simplon Pass (below).  This cable-stayed structure encloses its tensile fans in concrete to stabilize them against the fierce valley winds and protect them against corrosion.  The resulting raked triangular planes of concrete that connect the bridge’s piers  with its deck are elegant expressions of how loads are transferred from the spanning girders to the bearing towers (the tallest rising more than 150m).  Ordinarily, an aesthetically-minded engineer might expose the cables themselves, contrasting the elegant, light lines of tension with the more massive compressive and bending structures they connect.  In this case, though, Menn recognized parallel needs for stiffness on the one hand, and a structure that held its own against the vast scale and ruggedness of the mountain valley around it.

Such a refinement of structural need and visual desire underlies much of Menn’s work and his philosophy of bridge design, which is laid out in an introductory essay and interview in Christian Menn: Brücken (Zurich: Scheidegger & Spiess, 2015).  “Bridge aesthetics,” he writes, “consist of the visual expression of an efficient structure that is integrated optimally into its surroundings and that has been given an elegant shape.”  Simple, but such simplicity is usually the result of diligent iteration, redesign, and distillation of these realms into a single solution that responds to all of them.  Menn notes that our perception of beauty stems from ‘natural’ and ‘man-made’ aesthetics.  The former, he notes, originates from our environment and from the geometries and patterns that structure the world.  The latter are more difficult to define—Menn says that man-made aesthetics come simply from “human creativity,” but he (perhaps wisely) doesn’t delve much more deeply.

I get the sense that what Menn really means is that true beauty (at least in bridge design) comes from the dialogue between these two—between the patterns and forms that we instinctively recognize in the natural world as being strong, or orderly, or somehow satisfying to our deeper instincts for efficiently surviving out in the world, and those that we recognize as putting a human stamp on things—intentional, reliable, and aimed at leveraging our efforts at getting around or simply getting by.  When a bridge form feels like it responds both to its natural setting and to our desire to cross or otherwise engage it, the resonance between the world as it is and the world as we’d like to make it seems achievable, and this strikes all kinds of chords within our minds.  At its best—and in almost all of Menn’s bridges—we feel like we can get to where we’re going while also being more or less in harmony with the inevitable processes of nature.  That may be a wild fiction, but it’s one that we’re hard-wired to want to believe in.

Menn’s essays on his individual bridges are like a masterclass in bridge engineering and aesthetics.  While each project has a more or less traditional presentation, these are matched by a few short paragraphs each by Menn that contain more personal recollections.  Sometimes these are focused on a particular challenge—the rocky soils on which these bridges bear were a consistent struggle—but Menn also describes the aesthetic challenges involved in matching the rigors of large-scale concrete structures to the sublime landscapes they were built within.  In many cases these reflections are strikingly self-critical—details that Menn would obviously like to have a second chance at, or systems or decisions dictated by local or federal governments that proved short-sighted.  The Chandoline Bridge at Sion (1987-1989) comes in for particularly harsh self-scrutiny, and Menn’s assessment of it is a lesson in both design principles (don’t pair similar elements with not-quite-parallel geometries, vertical bearing elements should have a more or less continuous geometry) and visualization (model everything—drawings tell only a small part of the visual story). 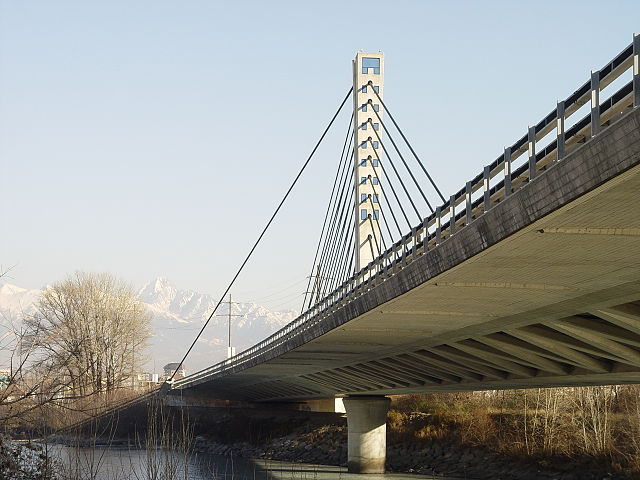 Brücken is framed by several scholarly essays, including a masterful assessment by David Billington.  As one might expect, Billington focuses on the influence of Robert Maillart on Menn’s upbringing and early designs.  Indeed, most of Menn’s independent work from 1957-1971 is a direct outgrowth of the shallow arches, integral decks, and expressively detailed concrete that Maillart pioneered throughout Switzerland in the early 20th century.  But Billington also notes that Menn’s later work reverses the Maillart formula; tasked with consultancy instead of full design work on larger and larger projects, Menn explored instead the technical and visual possibilities of tensile structures in which the key elements rise above the bridge deck rather than reaching to the ground below them.  Billington sees in this the influence not so much of Maillart, but rather of Swiss-American engineer Othmar Ammann, who designed the suite of large suspension and arch bridges in and around New York City that streamlined structural elements and connections into works of sculptural sublimity.

While Menn shares Ammann’s interest in structural poetics, his detailing is consistently more expressive and explanatory than Ammann’s.  Concrete, of course, lends itself to more nuanced forms than steel, but in Menn’s ‘phrasing’ of tower, arch, and deck that is common to both arch and suspension bridges he consistently finds ways to punctuate his structures to make it clear how one element relates to another, what the scope of the loads being transferred or borne is, and how geometry and statics must be reconciled along the sweeping shapes of highways.  In his introduction he offers a succinct (and unsurprisingly taciturn) formula for bridge aesthetics that could apply to any work of sufficient technical challenge: 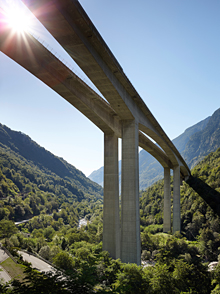 “The most important basis for achieving balance and harmony in works of structural engineering is a clearly organized three-dimensional visible form that originates directly from the structural concept.  This form is essentially three-dimensional and thus must not be developed using two-dimensional means, i.e., on a sheet of paper.  The goal should be a slender, transparent, elegant structure that projects technical efficiency.  In this regard, the following factors are particularly important: 1) The unity of the structural system (as many components as possible working together), 2) the unity of the visible form (a continuous arrangement of members or surfaces, as well as visually similar shapes for cross-sections), 3) the visual expression of the flow of forces by means of a carefully shaped variation of cross-section dimensions corresponding to these forces, and 4) Giving visual emphasis to the three dimensional stability of the structure.” (Image 4 left: Sunniberg Bridge, Klosters)