**Jonathan Chenoweth is an author in our new issue on reusing and recycling our so-called 'greywater'.

Water stress and water scarcity is a growing problem around the world. Recently according to various news reports (e.g. from the guardian and the BBC), Delhi, a city of 17 million people was left without any water after the city’s water supplies were cut as a result of a protest, showing how easily supply problems can occur. The United Nations reports that 700 million people currently suffer from water scarcity, with as many as 1.8 billion people to live in countries suffering absolute water scarcity by 2025. While much of this water scarcity relates to a scarcity of water for agricultural use, many cities already face real challenges meeting the water needs of their populations. With growing population the challenges are likely to grow.

While many cities facing real water supply challenges are in developing countries, wealthy cities in the west are not immune from problems. The Governor of California declared a State of Emergency on the 17th January 2014 due to the unprecedented drought conditions facing the state and many of the state’s reservoirs being at record lows. All Californians were asked to try to cut their water consumption by 20 percent. In 2008 a drought in Cyprus meant that households only had running water a few hours a day as severe water rationing was introduced.

Even cities in northern Europe are not immune from water supply challenges. Twenty million people in southern and eastern England, including all residents of London, faced hosepipe bans in 2012 as a result of unusually dry conditions during the previous two years. This was despite London opening its first desalination plant in 2010 – a technology normally associated with arid Persian Gulf states, not a city that people are more likely to associate with cold wet weather. Increasingly desalination is being used around the world to meet growing urban water demands where local resources fall short. Israel now meets nearly 70 percent of its household water needs via a series of huge desalination plants which it has constructed along its Mediterranean coastline. Spain too has constructed some massive desalination plants, including the largest in Europe although faces serious challenges around operational costs. Desalination technology, however, is expensive and energy intensive, needing about 3.5 kilowatt hours (kWh) of electricity to desalinate 1000 litres of water, so not great from a climate change perspective. Better ways of dealing with water scarcity are required.
Image 2: Reverse osmosis desalination plant in Barcelona, Spain

One answer to the problem of meeting the water needs of growing urban populations is to use water more efficiently. Water for cities is treated to drinking water standards and then piped to households but only a tiny amount of water is actually drunk or comes in contact with food. Most water is used for uses that don’t require water pure enough to drink. In the UK, for example, the average person uses about 150 litres of water a day, with more than a third of this for flushing the toilet or watering the garden, clearly a waste of a precious resource. In the US household water consumption is much higher. Some cities, such as Hong Kong, have two sets of water supply pipes, one with fresh water and in Hong Kong’s case, a second set of pipes with salt water for toilet flushing. However, this practice is not likely to become widespread.  The cost and resources required to lay a second set of pipes in an existing city is prohibitive compared to the financial savings in fresh water and the process of laying the pipes would be incredibly disruptive to life in the city.

A more viable alternative is to use lower quality water sources where such water is produced – recycling grey water and capturing rain water so that they can be used to cut freshwater consumption. Every household produces grey water from a variety of sources – showers, washbasins, kitchen and washing machines. This potential resource is mixed with pathogen-rich waste water and then disposed of via the sewerage system, possibly with the addition of rain water also, depending upon how and when the city was constructed. 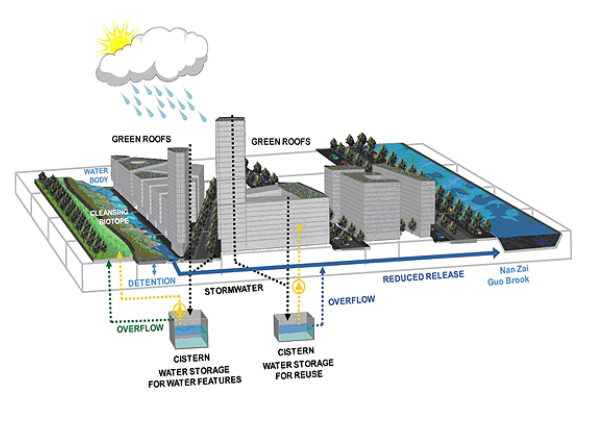 The reuse of grey water or rainwater is not without major challenges, including cost. In many wealthy cities around the world, families will often spend far more on their mobile phone bills than on water and sewerage services so there is little incentive to make significant investment in water efficiency. Despite problems of scarcity, water for most people is cheap but the capital cost of individual water reuse systems can be prohibitive.  Regulations designed to protect health can also stand in the way and prevent widespread uptake of reuse systems. Such barriers and how they can be overcome are explored in the latest special issue of Built Environment. In this collection, a group researchers who collaborated on a European Commission funded project Servicizing Policy for Resource Efficient Economy (SPREE) project present their research findings supplemented by papers from other researchers also working in this area. The SPREE project looked for innovative solutions to some of the barriers which have so far prevented significant uptake of water reuse systems.

Image 1: Drought affecting Lake Mead, the major reservoir from the Colorado River, in May 1984 and 2016 (Source: NASA at the Earth Observatory, http://earthobservatory.nasa.gov/IOTD/view.php?id=88099, original images by Joshua Stevens using data from the U.S. Geological Survey collage by Lucy Natarajan)